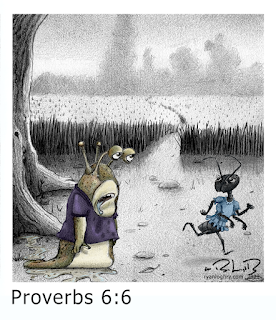 Well folks, I just couldn't stand it. I had to I add a background to the characters for this illustration. I borrowed this background from an illustration I did a few weeks ago, for a book project I am just finishing up. I think it fits our characters well, and they look so much happier to have a world to live in, rather than just a sad, empty white background.

I cropped the background so that it would fit my characters better. I tried layering some close up stalks of grass to add depth, but it was too distracting so I dropped that idea. I left the background black and white, so I could keep the focus on the characters.

The scale of the characters is much larger than real life obviously. I am allowed to do this because I am a cartoonist, and we get to change things at will. Can you imagine coming across a slug and ant that size out in the woods? Think of the slime trail. Bleh. Thankfully cartoonists/illustrators ideas mean little beyond amusing their audience, so I don't have to feel guilty about unleashing this sluggard on society. This illustration seems to work well now, let me know what you think.

Hey-howdy-hey everybody! This week I have an illustration from pastor Andrew's sermon on Proverbs 6:1-19. I encourage you to listen to the full sermon here on the Northwest Gospel Church website. Beginning in verse 6 we are introduced to the sluggard, the powerful imagery there combined with Andrew's tale of "Slime in the Moonlight" was so powerful I really didn't have any choice on what to draw this week. Immediately these characters popped into my mind, and begged to be drawn. Had I the time (oh, how often do I sing that refrain) I would have sketched out the fellow with the pointing fingers, the "ROLLING EYES" character... but this is what I had time for. Please, give the sermon a listen, it is a good one, you won't regret it.

On the surface this piece of scripture is full of pragmatic wisdom, but we are again reminded that everything in Proverbs is viewed through the lense of godly wisdom. It isn't simple pragmatism of which I and some in society today are fond of. God’s Law frames our world, as the principles he has designed create immutable truth, these truths are laid out for us in the book of Proverbs. This book gives us the street smarts to operate in the world today as Christians.

We often fall short in life, I know I do. Sometimes on an hourly basis, and that is where God meets us. In these moments we are called as Christians to repent (not just spoken words, but in our hearts) and ask God's forgiveness. He meets us with the truth in His word, and with grace through Jesus' sacrifice for us. 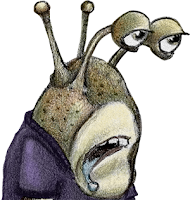 On a side note, I am the wise-cracker that Andrew mentions in the beginning. I frequently try to make people laugh or smile. Those comments are most often empty, of little or no value other than a fleeting laugh from whoever I'm with. I would like to think that I am not that cynical, and that I no longer go to the well of sarcasm as often as I did as a teenager (that was so long ago now I think it has mostly worn off). I suppose Angela would be a better judge of that than I.

Here are some of the truths to remember from this scripture: Today's decisions produce tomorrow's results. Financial debt strips security. Correct mistakes humbly. In conclusioin act carefully, be humble, stay in God's word daily. Read that part about things God hates starting in verse 16, these are street smart words to operate by.

This pencil sketch was done with a Pentel .7mm P207 mechanical pencil in a Pentalic Sketchbook on 70lb paper. I hope you enjoyed this post, and that it encouraged you, made you think, or challenged you, and that you will read more about God's wisdom and truths laid out in the book of Proverbs. God bless you, and have a great day! --Ryan

Posted by RyanLoghry at 8:08 AM