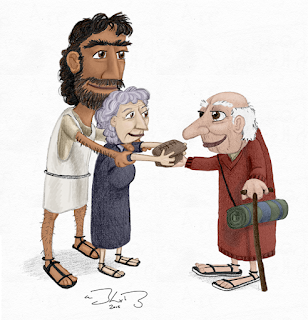 Last Sunday our sermon was about the story of Ruth. Ruth is a story about how God redeems broken lives, brings light to the darkness.

One of the points Pastor Mike touched on was how Naomi's faith was highly visible to those around her. Naomi's faith made a big impact on her daughters-in-law, both of whom refused to leave her side even though their husbands (her sons) had died. Ruth went so far as to return to Naomi's homeland with her (a land that was a bitter enemy of Ruth's birthplace, Moab), and help provide for Naomi. Picture giving up your life here, moving to Iraq, or Iran for good to help your mother-in-law after your spouse has just died.

Rather than do what was easy or comfortable for herself, Ruth did what was best for Naomi. Ruth had seen something in Naomi that convinced her to do this. She had seen Jesus, she had seen "love one another" worked out day after day in Naomi's words and actions. It led me to think about how hard I try to "love one another", and how much harder I should be trying.

So as I listened to the sermon I drew this sketch. Jesus is seen directing Naomi. She is providing for a man, maybe a homeless man, I don't know, but a person in need. He definitely suffers from cartoony giant feet.

I hope you enjoyed this drawing, and thank you for stopping by.

Posted by RyanLoghry at 8:48 PM No comments: