Today was a very good day. The Yankees won! Yaaaaay!

We also had a very successful morning trip to Riverside Park. Karen wanted to go see one of the locations from a favorite movie of hers, You've Got Mail. Below is a picture of me in the park, they had a baseball diamond there too. 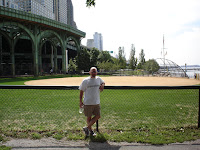 Then we went to midtown for lunch at one of my favorite restaurants in the world, The Blue Smoke: 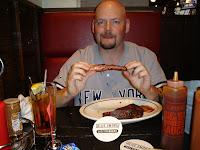 Sunset at the Stadium: 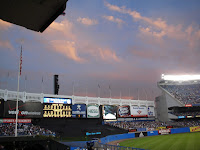 Me at the Stadium, the Yanks have won, the night is over. We're saying our goodbyes. I have many fond memories of the Stadium, with friends, and my sister Karen. 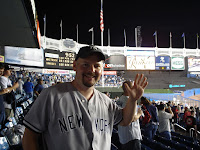 I'll post links to the quicktime movies I shot next week, when Karen brings me a cd with the files.
Posted by RyanLoghry at 9:26 PM 4 comments: 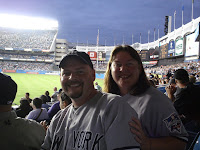 As promised here are a couple pictures from the game last night. I yelled my voice out in the first inning, when Jeter broke Lou Gherig's all time hit record of 1269. The crowd gave Jeter a long standing ovation, it was terrific. Giambi hit a solo home run his first time up. Unfortunately, the Yankees lost the game. Still, we had a wonderful night at the grand old stadium. 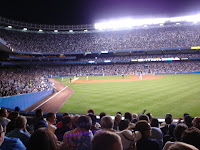 Sitting in front of us was a family of four, one of the little boys new EVERYTHING about baseball, and was lecturing his little brother about the rules of the game. It was very cute, and they provided many laughs throughout the game.

And finally here is a snap of the 4 train ride home. I'll try to post the qt movie Kari took, it does a better job of showing how packed the train was. 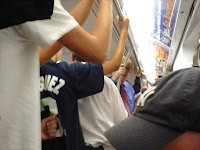 Posted by RyanLoghry at 8:01 AM No comments: 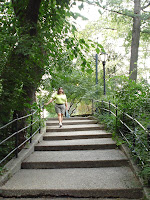 Here is Karen in Central Park!

Okay so we spent 2 hours this morning after breakfast looking for an Aveda Spa, which, if I'm not mistaken, can be found in each and every major city in the world, including the two cities Karen and I live in. We spent most of this 2 hours walking on Broadway, when we should have been walking on WEST Broadway.

Why they felt the need to name two streets the same, I will never know.

We did however FINALLY get to Aveda Spa, only to find out that it was closed until the afternoon due to training courses. 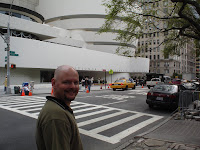 Then we ate lunch, then we went and stood near the Brooklyn Bridge, but didn't get to go on a cruise to see the waterfalls because... wait for it... waaaaait... the cruise times have been cut in half because of complaints from the neighbors. No kidding. Apparently the hordes of tourists were trampling things(small children, flowers, etc). So, we missed one of the main things we wanted to see.

HOWEVER... tonight we will see history made, when Derek Jeter becomes the all time Yankee hits leader, passing none other than Henry "Lou" Gherig. Pics from the game posted tonight, or tomorrow morning.

P.S. I'll post pix and video from the game tonight tomorrow.
Posted by RyanLoghry at 1:14 PM No comments: 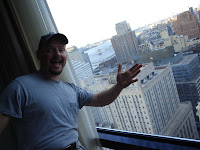 Greetings from the Big Apple. My sister Karen and I are in New York for our last visit to The House That Ruth Built. Tonight we are watching the game in on tv our luxurious hotel room at the Millenium Hilton, right across the street from the World Trade Center. Tomorrow night, and Wednesday night we'll be at the games, cheering on the Yankees.

Last weekend was the annual climb up Mt. St. Helens for my hiking buddies and I. It's not a technical climb, it's just a long steep hike. The current elevation on the mountain is 8,365 feet. I only made it half way up this year, as I'm still recovering from an injury I sustained last year while training to climb Mt. Adams, which is just to the east of St. Helens. It was a beautiful day for the hike, and I was very happy to be able to hike again, the road to recovery has been a long one, my faith in God and the support of friends and family have gotten me through it.

You can just pick me out amongst the rocks here, Jeff took this one from above as the others continued on to the summit. To my illustration friends: I took my sketch book along and after I hiked back down to my Jeep, I spent the rest of the day working while waiting for the others to come back down. I really did get a lot done that day.

Hi everyone! I've been insanely busy the last few weeks, but in a great way. I've had lots of freelance work, for which I am very grateful. Unfortunately I can't show my work on my blog. I thought I'd share this little side project with you to make up for being absent so long. I scratched it out before work yesterday, and colorized it last night.

Angela and Stan comprise Team Fire Newt, in the Great Chili Cook Off at church this week. I drew up these fire newts for their table placard which each entrant must display so everyone knows who to vote for. Stan is a welder, and Angela is a nurse, hence the costumes for the newts.
Posted by RyanLoghry at 7:38 PM 3 comments: