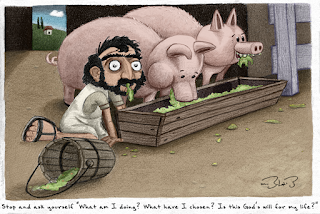 Hey-howdy-hey, I made time to do a color version! Well, I needed a break from the chickens I had been drawing for weeks(and will be drawing for weeks to come, but more on that later...), so I spent the last four mornings colorizing the prodigal son and the pigs. this time I made extensive use of underpainting, which I don't normally do. I think it adds richness, and depth to the color. anyway... I hope you all enjoy it, and that you are staying cool.--Ryan

Howdy folks. Today's illustration is another in my Sunday Sermon Series, from this week's sermon at Hockinson Community Church. The sermon was about the prodigal son parable Jesus told and is found in Luke 15:11-32. 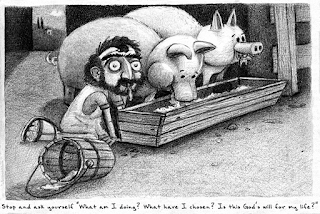 I have read this piece of scripture many times, and have heard at least two sermons that I recall on it. Pastor Andy's sermon had a little bit different take(as usual) than the other sermons I had heard. Andy has a terrific knowledge of life/society during Jesus times. I always knew that when the prodigal son asked for his inheritance and the freedom to leave that it was a slap in the face to his father. What I hadn't ever heard before was that it was so much more than that. In those times, and that society it would have been perfectly acceptable for the father to kill his son for the disgrace he had heaped upon him. So the prodigal son's sin could have, should have, cost him his life. But the father saw him coming and ran to him, forgave him, sacrificed the fatted calf for him, welcomed him back with open arms with no questions asked. "For this son of mine was dead, and is alive again; he was lost and is found." (Luke 15:24)

We suffer the same when we try to shake God off, and live for this world. But if we seek repentance God is always there, running towards us. The tag line sums up what I took from this sermon. I think we should routinely stop and look up from our busy, hectic routine. We should assess our lives, our direction, what we are doing and saying(and why we are doing and saying it), and see if it aligns with God's will(and please know that when I say we, I am most definitely including myself). It's easy to get off track in life, but it's also easy to get back on track. Just turn towards Him.

I did not have time to colorize the drawing this time. With the temperature back in the 90's this week I can spend very little time in my office. Also I have little time these days for work what with Angela, Stella and the boys and the house/chores needing my attention. I like the drawing itself, but am not one hundred percent happy with it. I was going for a more subtle expression of self realization/shock at his predicament for the prodigal son there. More of a "the fog is lifting "What the..." moment. As it is, he looks suspiciously like Marty Feldman if he stuck his finger in a light socket. That's fine because I always liked Mr. Feldman, but it wasn't what I was going for originally. But, with little to no time to rework things what you see is what you get around here these days.

As always I hope you enjoyed this drawing. I hope this post was informative to you and helps you in some way in your walk. Thank you for stopping by. God bless.--Ryan

Posted by RyanLoghry at 7:03 AM No comments: