Hello everyone! Today I have my 200th post on this blog. Wow. That seems like a lot. When I started (September 24, 2007) I was just posting so that I could participate in Illustration Friday (a world wide group of artists who would illustrate a topic each week, then critique, encourage and praise each other sadly that site is long gone). Now my posts are mainly sharing the good news of Jesus Christ I hear in church. Today I have an illustration from a sermon I heard back on October 30th, 2022. The title is Rise of the Resistance. You can listen to that sermon here. The scripture covered is Acts 5:12-42.

At this time God's power is growing his people. This is a work of God, not of man. The apostles were not selling a popular movement with charisma. God was saving sinners, the gospel of Jesus was advancing. Jesus is the news, we are to spread the news just as the apostles did.

The spirit was working through the apostles and many signs and wonders were done in Jerusalem. Sick people were healed, and unclean spirits driven out. Even Peter's shadow was used as we are told that it passed over a man and healed him. People start to come from the outlying areas to be healed and to hear the good news, much to the chagrin of the Sadducees. 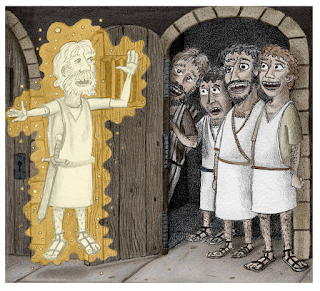 As the religious leaders bring opposition against the apostles, the witness of Christ is validated as an authentic work of God. But the Sadducees efforts to stop the apostles by arresting them backfires and helps to spread the good news. Every scheme of man bows to God's plan. During the night an angel of the Lord comes and opens the doors of the prison. The angel leads the apostles out and says "Go and stand in the temple and speak to the people all the words of this Life." So the Sadducees find the apostles in the temple the next day preaching. They have them arrested and brought before the council again, angry that the apostles refuse to obey. Peter makes a fine speech, laying out the gospel for them, and saying that the apostles must obey God, not men. 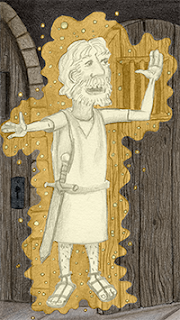 Well that didn't sit too well with the Sadducees as you can imagine. They decided to kill the apostles. Old Gamaliel spoke up and said you'd better think about that again. He talked some sense into them, pointing out that killing the apostles would be like pouring gasoline on a fire, but if this was man made plan it would fail. So instead they beat the apostles and kicked them loose.

The final verse in this story sums it up well:Acts 5:42 And every day, in the temple and from house to house, they did not cease teaching and preaching that the Christ is Jesus. So remember, every scheme of man bows to God's plan.

I drew the dramatic scene of the angel of the Lord releasing the apostles from prison. As you can see I didn't go for the modern "winged baby angel" in a diaper but a grown warrior type. I gave him a glow, as they are often referred to as hard to look at because they are so bright.

I hope that you have enjoyed my synopsis of the sermon, and my illustration. I hope that you are challenged or encouraged by my post, and that you will go and listen to the sermon, it's another good one. May God richly bless you my friends, until next time.--Ryan

Posted by RyanLoghry at 4:34 PM No comments:

Hey howdy hey buckaroos!  Today I have drawings from a sermon I heard back on October 23, 2022, on the book of Acts.  I highly recommend that you listen to it  here.  Today we learn that Jesus is deadly serious about his people's witness.

As the story begins here we see that the early church is growing, flourishing. The members are living out "love one another" by helping each other with daily needs, to the point of selling land and sharing the proceeds of the sale with those in need. Radical generosity. Mt. Saint Helens May 18th style generosity.

Hypocrisy in the ranks of those associated with God's people has been one of the great scourges of church history. In this stark story, we see that the Lord is not OK with it.

But... "But a man named Ananias, with his wife Sapphira...: Acts 5:1 Ananias and his wife lied about the price of the property they sold. They didn't have to give any of the proceeds of the sale, they didn't have to lie about what they gave, they chose to be deceitful. 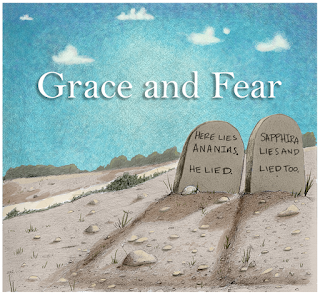 Hypocrisy in the ranks of those associated with God's people has been one of the great scourges of church history. In this stark story, we see that the Lord is not OK with it. As we see God's justice swiftly punish sin, we are confronted by the grace of Jesus, who bore the weight of divine judgment on the cross. He paid the debt for ALL sin, for EVERY person, for ALL time. "Look what the Lord did to Ananias and Sapphira!" No! Look what Jesus did for you.

If you think Christian hypocrisy is a massive issue, so does Jesus. It's his name and reputation that falls into disrepute when people falsely claim allegiance to him.

The Lord fiercely guards his people's integrity because the church would carry on the witness of Jesus in the world.

I hope that you will listen to the sermon, and that this post has challenged and or encouraged you. May God richly bless you my friends, until next time.--Ryan

Posted by RyanLoghry at 12:39 PM No comments: