Hello friends, I hope you are all well! Today I have another sketch in my Sunday Sermon Series. I drew this while listening to Pastor Shaun's sermon yesterday. We began a new study in Colossians. 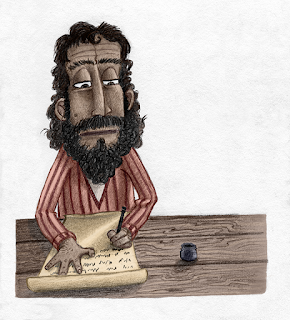 This is my cartoon version of the apostle Paul. Here we see Paul writing to the Christians in Colossae, people he had never met before. He introduces himself as an apostle (not a disciple) "by the will of God," meaning he was chosen by Jesus (see Acts 9 for the story of his conversion on the road to Damascus). This established his authority to speak into their lives. He told them he was thankful for them, and the faith and hope that lived within them. He encouraged them to live a life worthy of the Lord (that showed the character of Christ). He reminded them to give thanks to the Father that they were delivered (rescued from the darkness Col. 1:13), qualified by the Father to share in the kingdom of light (Col 1:12), and redeemed by the Son, forgiven of sins (Col 1:14).

I drew Paul with a serious expression, rather than putting a thoughtful "searching for the right word" expression on his mug. Maybe it is his pre-conversion life, seeking out and having Christians put to death that makes me think of him that way. Maybe it's that in so much of his writing he talks about the law, and that he was so very good at a legalistic lifestyle before Jesus stepped in to his life and changed his direction. These things dominate my thoughts when I picture Paul. I just don't picture him the same way I do the apostles who were fishermen, a tax collector, or a doctor. It's hard for me to imagine/draw him not being serious. And yet surely at some point he must have smiled and laughed. He did know joy and peace in the midst of his trials and suffering.

I realize this drawing doesn't have a lot of action in it. I usually try to draw an exciting or compelling verb. Here Paul is sitting and writing. But Paul's writings have affected the lives of so very many people in the best way possible. So perhaps his writing has had more action in it than most things I've drawn so far.

This is just the beginning of this study, I hope to post more from it in the next 10 weeks. Let me know what you think about this drawing or my commentary here. Any mistakes are mine, and should not reflect poorly on Pastor Shaun or Harley (who taught in Sunday School this week). This pencil sketch was done with a Pentel .7mm P207 mechanical pencil in a Pentalic Sketchbook on 70lb paper. It was scanned and then colorized in PhotoShop. The color layer in PS has only 35% opacity. I feel this lets the pencil work show through, yet gives the appearance of a light wash of color. I hope you enjoyed this post, and that it encouraged you or challenged you. God bless, and have a great day! --Ryan

Posted by RyanLoghry at 4:44 PM